How green is your ice-cream?

Eating a mouthful of Magnum, Cornetto or Ben & Jerry’s ice-cream, the typical consumer has little concern for the precise temperature at which it has been transported from the factory.

But behind the scenes, a team at the brands’ owner Unilever, the world’s largest ice-cream maker, has been working to push that temperature higher — the goal being to move from shipping at -18C to shipping at -12C.

Together with a switch to green refrigerants and better insulation in ice-cream freezers, the shift forms part of an effort by one of the world’s largest consumer goods groups to slash greenhouse gas emissions.

Marc Engel, chief supply chain officer at Unilever, says: “The difference between -18C and -12C is very significant, but it’s easier in the developed than in the developing world. If you have an ice-cream cabinet out in the sun at 35 degrees, it’s more difficult to control [the temperature].”

Covid has many people wobbling about ‘do we have the bandwidth?’

Unilever has just tightened its overall environmental goals, announcing that it will pursue net zero greenhouse gas emissions by 2039 and invest €1bn in a new 10-year climate and nature fund. The new targets were unveiled in June despite the impact of the coronavirus pandemic, which left Unilever with zero sales growth in the first quarter.

Ice-cream suffered the biggest drop in volumes of any part of Unilever’s food division. But Mr Engel says it is “very important just at this moment in time to reaffirm our commitment [to sustainability]”. “Covid has many people wobbling about ‘do we have the bandwidth?’,” he adds.

The challenge for Unilever’s ice-cream brands is to cut emissions in the “cold chain” from manufacture to the consumer without compromising the taste or quality on which their reputation depends.

It is one of many such puzzles facing multinational foodmakers as they seek to reduce their environmental impact. Food accounts for 30 per cent of global greenhouse gas emissions, according to the Food Climate Research Network.

Ice-cream freezers are one part of its environmental footprint that Unilever can directly control. The same is not true of most emissions attributable to food manufacturers, which occur further back in the supply chain. 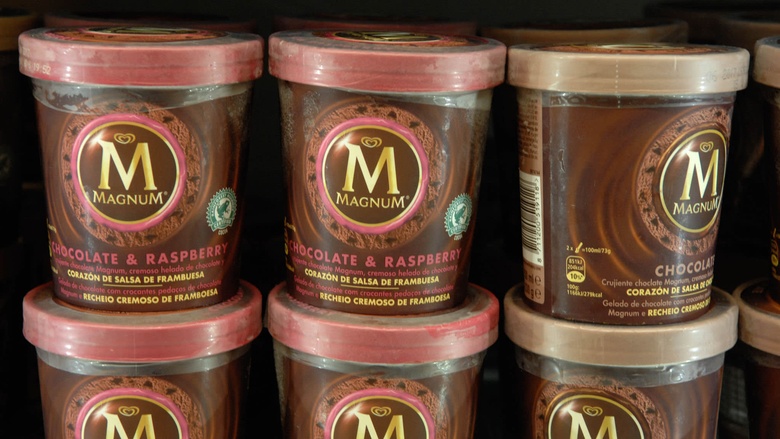 “One of the important things with consumer goods companies is that 90 per cent of their emissions lie outside their own processes,” says Carole Ferguson, head of investor research at CDP, a non-profit organisation which runs an environmental disclosure system used by investors and other stakeholders.

In the case of foodmakers, so-called scope 3 emissions, which occur in a company’s value chain, far outweigh scope 1 emissions — made directly by the company itself — and scope 2 emissions, from the energy it buys and uses.

The distinction means that food and consumer goods companies have so far received less climate-related scrutiny than industrial and energy groups, with investors less conscious of their exposure to climate-related risk. But that is changing.

Cutting scope 3 emissions requires engagement with the farmers growing the raw materials for food, along with efforts to combat deforestation and methane emissions from cattle.

Progress here has been limited. Greenpeace, the climate campaign group, noted that Unilever’s latest announcement pushed back its target to achieve a deforestation-free supply chain from 2020 to 2023. John Sauven, executive director of Greenpeace UK, accused the group of having a “business model . . . based on environmental destruction”.

Yet Unilever scores better than many rival consumer goods groups for exposure to climate risks, according to CDP. It tops the non-governmental organisation’s table for household and personal goods companies, beating rivals such as Germany’s Henkel.

Among food companies — not including Unilever, as its household and personal goods divisions are a larger part of its business — Danone and Nestlé top the table for preparedness for the low-carbon transition, with Mondelez and Kraft Heinz at the bottom.

Down on the farm

In part, the scores depend on the nature of the products each company makes. Nestlé and Kraft Heinz are both weighed down by a focus on meat and dairy products, CDP says. Yet a close engagement with suppliers can help to compensate.

Danone, founded as a yoghurt maker and still heavily invested in dairy, “is really excellent when you look at their scope 3 emissions . . . Danone actually works with all their farmers and milk and dairy groups to track back exactly where their products come from,” says CDP’s Ms Ferguson.

With consumer goods companies, 90 per cent of their emissions lie outside their own processes

Eric Soubeiran, vice-president for nature and water cycle at Danone, says the group wants to boost its plant-based products. But he rejects the suggestion that the group could reduce its climate footprint by cutting exposure to dairy.

Danone is trying to make greater use of local inputs in many of its locations — by sourcing milk from farms close to its factories, for example. It is also working with farmers to boost biodiversity.

As for Unilever, it is following a similar strategy. Like Danone, it does not plan to cut emissions by quitting energy-intensive areas such as ice-cream. Instead, it too has been strengthening connections with farms.

“Sustainability isn’t a cost,” he says. “It is an investment.”

Some 100 people now work in agronomy departments at Unilever, dealing with farmers who would previously have heard little from the multinationals whose products emerge several steps down the supply chain.

These conversations cover land management techniques and technology that can reduce emissions, yet also have the potential to boost yields in the long term — a point that Mr Engel stresses.