Rampha Khamhaeng, a farmer in central Thailand’s rice-growing Suphanburi province, was sceptical when she first heard about a new farming method for paddy fields that could reduce both water use and greenhouse gas emissions.

The technique, called alternate wetting and drying, breaks with Thai custom, under which most farmers keep their fields submerged through the growing season.

That means the new method also reduces the amount of methane created by stubble and other organic matter decomposing underwater in the paddy. The gas is a significant contributor to global warming, with rice cultivation the second biggest agricultural source after livestock.

“To be honest, at first I didn’t buy it,” says Ms Rampha, wearing a yellow T-shirt bearing the logo of GIZ, the German government aid agency sponsoring a pilot “sustainable rice platform” in partnership with the Thai government. “Now I tried it and it works — it’s the best way.”

The technique is not just good for the environment; it also saves her time, she says, and the money she used to have to spend on diesel to pump water to her farm, which is on high ground. The Thai project, meant to target 100,000 households in Suphanburi and five other provinces, is part of a new push by campaigners and governments to reduce the climate impact of rice.

“Globally, rice production accounts for about 1.5 per cent of greenhouse gas emissions — the same amount as all aviation emissions,” says Bjoern Ole Sander, senior scientist and country representative for Vietnam with the International Rice Research Institute. Vietnam, the world’s biggest rice exporter after India and Thailand, has made low-carbon rice production part of its commitments under the Paris climate change agreement.

However, persuading farmers and governments in rice-growing countries to focus on the environmental and other costs of the sector has taken time. Rice is not internationally traded to the same extent as other food products: the proportion of the crop that stays in-country is much higher than for coffee, say, or wheat. As a result, it has attracted less attention from pressure groups concerned with workers’ rights and the environment. 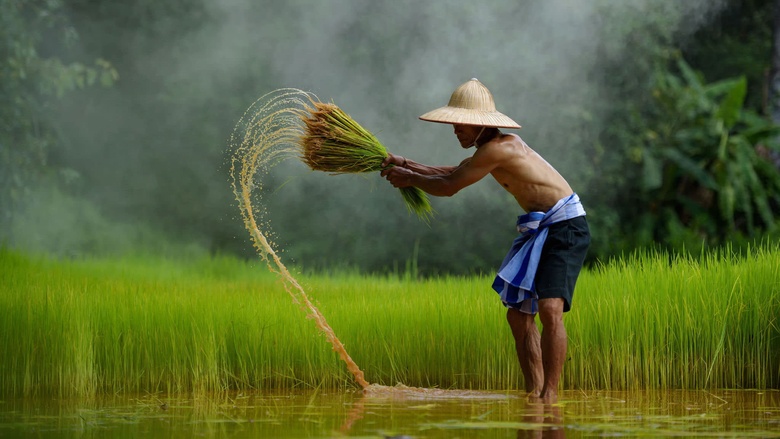 “In other commodities like cocoa and coffee, there is a more developed sustainability standard,” says Suriyan Vichitlekarn, a Bangkok-based agriculture and food expert with GIZ. “For the rice sector, until about 10 years ago, there wasn’t any clear standard.”

With sustainability rising up companies’ and governments’ agendas, however, the commodity’s carbon footprint is coming into focus. Demand for rice is growing along with the world’s population, and the crop’s annual water consumption and gas emissions are among the highest for any food crop.

GIZ’s first foray into this sector was a project called Better Rice Initiative Asia that included Thailand, Vietnam, the Philippines and Indonesia in a push to promote good agricultural practices and standards.

The current programme is called Thai Rice Nama (which stands for Nationally Appropriate Mitigation Action) and it takes in a broad range of sustainability concerns, from water conservation and biodiversity to worker safety and eliminating child labour.

As well as alternate wetting and drying, it encourages the use of practices such as laser land levelling, which produces flatter paddies. These in turn allow farmers to reduce their use both of water and fertiliser.

For the Thai government, the focus of the rice pilot is maintaining jobs in farming and producing food for the country more profitably. But for the farmers themselves, many of them smallholders and many female, the focus is on sustaining livelihoods.

Sawanee Phorang, another Suphanburi farmer, heard about laser land levelling and began watching demonstrations of it on YouTube; when the process became available, she volunteered to try it out. 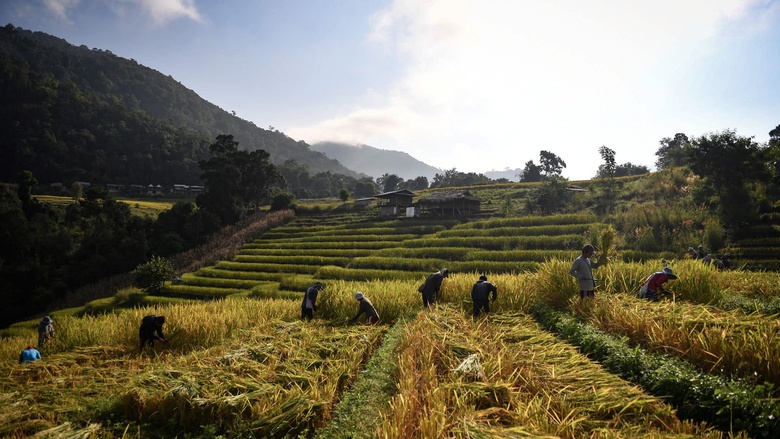 “It reduced my fuel costs by 50 per cent,” she says, leafing through a ledger where she records farm expenses. Ms Sawanee supports a family of four and earns money from multiple sources, including selling rice seed and making sweets and noodles from rice.

The farming pilot comes at a time when climate change is coming into sharper focus in Thailand after the past year’s unusually severe drought.

The farmers in Suphanburi have no difficulty drawing a connection between their own activities and the changing climate. “Farmers are a small player, but we want to take part in the fight against climate change,” says Ms Sawanee. “Consumers should be free of worry from eating the rice we grow, and the environment should be better.”